..I've been a bit overworked and underpaid, and with the snow, LOST episodes, and lack of proper funding, I haven't been playing much live.

In live poker, I've been stacked off in two consecutive sessions with dumb plays on my part. So, that's about $400 in the can. Onlne has been equally unimpressive cash-wise, with my early PS cash advantage dwindlin down to almost even. In short, I haven't been running all that well. A bright spot prompts my entry today... 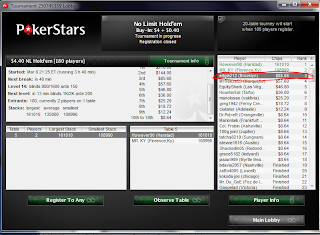 .
It was nice to put a little old=fashioned solid play to use and get it down to three handed.
I'm debating heading to AC with the GF this weekend to do this Caesar's tournament. I know, it sounds cheesy, right? It's going on in tandem with the Circuit Event, at the tail end, and it's been advertised on a lot of financial publications, so I'm thinking it might attract a soft crowd, plus a frustrated crowd from the busted Circuit Main Event. The big advantage is that the deal can all go on your credit card, and since I'm sometimes irresponsible like that, I'm about 70/30 sure I will make the trip. For $674 you get the buy-in and a room at Caesar's...of course if I don't cash I'd be mighty pissed.
Posted by edgie212 at 11:49 AM