Well, considering my days as a NY'er are numbered(for those not aware, I am moving to LA, though I am clinging to a residence here), I figured one last trip to AC was in order - specifically, to gaze upon Revel, the much-ballyhooed new casino and resort in town. My trip was troubled from the start, however.I'm not sure what I ate, but starting from the bus trip down, I was not feeling well. I felt even worse as I arrived at Bally's (the only place I could get a free room, oddly) and quickly proceeded to my room and spent the remainder of the day in and out of the loo. Exhausted, I fell asleepand awoke at about 3:30am. Well...I logged onto Bravo Poker and it appeared some games were going on downstairs, so down I went.Not much to report on the poker front. I lost my buy in when a diamond didnt come wiyh AdKd against top pair. So, it was now 8am and still feeling a bit wobbly, I jitneyed over to Revel. 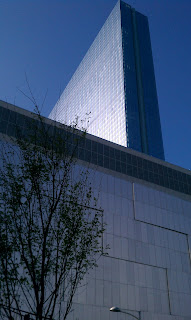 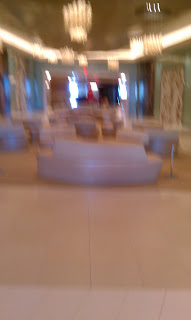 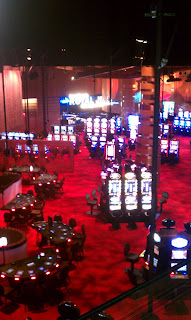 I can tell you right off the bat, that the Borgata has met its match. Revel has trumped Borgata in almost every way possible. The amenities, look and feel, and even the perfectly tailored sandy beach just outside were all top-notch. While the decor is lighted in a way eerily reminiscent of some portions of Mohegan Sun, it is of a slightly different, more decadent quality. It feels kind of lik
e walking into a chocolate cherry cordial when you step into the main gaming floor. 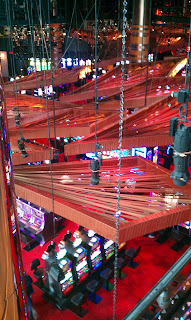 Though it was asoft opening and almost no eateries had opened yet, you could see where they were and they all looked great...the only place open was a taco stand that looked exactly like a food truck.
All around the periphery of the lower floor were long hallways with what can only be described as sitting rooms spaced between them. I'm assuming shops will eventually spring up around this oval, but none were evident yet.
One drawback is that getting to the poker room proved downright difficult. It is on the mezzanine, and the only really convenient way I saw to do it was to go up a flight of stairs on the lower floor. There is an escalator on the boardwalk side to go up, but there must have been a turn I missed, because I couldnt get to the poker side that way. I wanted to play, but no games were up. 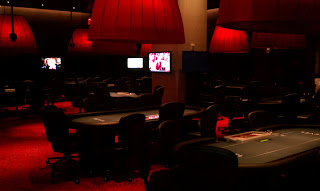 There is also apparently amazing view on their Sky Deck, but I didn't go. I was still not feeling so hot and I felt that playing any more would be detrimental, so I just hopped back on the bus. A disappointing day for poker content, but in LA I will surely have more adventures to tell, since I'll only be 15 minutes away from The Bike and Commerce, to name a few.
Posted by edgie212 at 6:30 AM 2 comments: